The Watchtower claims that their founder is Charles Taze Russell and predicted the date of 1914 many decades prior as an important aspect of history. The 1st World War happened. Originally it was supposed to be the end of the world in 1914. Note that it's been 100 years already, from 1914 to 2014 and the end still has not happened!

Their calculations are based on the following:

"'The time was the ninth day of the fourth month of the 11th year of the reign of Zedekiah' (Jer 39:2), i.e., July 18, 587 BC. The place was . The event was the fall of and the Southern Kingdom of Judah to the Babylonians under Nebuchadnezzar after a siege of two and a half years."

"587 BC   falls to the Babylonians, ending the . The conquerors destroy the Jewish Temple of Jerusalem and exile the land's remaining inhabitants."

"Babylonian captivity in the history of , the period from the fall of (586 BC) to the reconstruction in of a new Jewish state (after 538 BC). After the capture of the city by the Babylonians some thousands, probably selected for their prosperity and importance, were deported to ."

"When would that grand event occur? Jesus showed that the Gentiles would rule for a fixed period of time. The account in Daniel chapter 4 holds the key to knowing how long that period would last. It relates a prophetic dream experienced by King Nebuchadnezzar of . he saw an immense tree that was chopped down. Its stump could not grow because it was banded with iron and copper. An angel declared : "Let seven times pass over it."  Daniel 4:10-16.

In the Bible, trees are sometimes used to represent rulership. (Ézékiel 17:22-24 ; 31:2-5). So the chopping down of the symbolic tree represents how God's rulership, as expressed through the kings at , would be interrupted. However, the vision served notice that this 'trampling of ' would be temporary-a period of "seven times." How long a period is that?

Revelation 12:6, 14 indicates that three and a half times equal "a thousand two hundred and sixty days." "Seven times" would therefore last twice as long, or 2,520 days. But the Gentile nations did not stop 'tramplling' on God's  rulership a mere 2,520 days after 's fall. Evidently, then, this prophecy covers a much longer period of time. On the basis of Numbers 14:34 and Ezekiel 4:6, wich speak of "a day for a year," the "seven times" would cover 2,520 years. 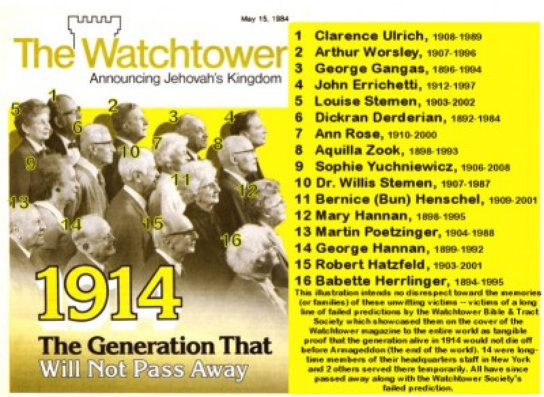 The idea that the "Gentile Times" referred to at Luke 21:24 form a period of 2,520 years has led to speculation and disappointment among many who expected Christ's return during the past two centuries. How did this belief originate and develop? What do the historical and Biblical facts show?

*The Watchtowers of October 1st and November 1st 2011, include an article in 2 parts attempting to discredit historians that support the date of 587 B.C. for the destruction of Jerusalem.

Here are the reviews :

-COMMENTARY BY DOUG MASON ON WHEN WAS ANCIENT JERUSALEM DESTROYED? PART ONE: WHY IT MATTERS; WHAT THE EVIDENCE SHOWS.(PDF.)

-CRITIQUE (PART B) REFERENCES of When Was Ancient Jerusalem Destroyed? Part 2, What the Clay Documents Really Show (Watchtower, November 1, 2011, pages 23 -28). By Doug Mason.(PDF).

-The destruction of Jerusalem : when? By Sébastien Koch.(PDF) (French).

See file on the 2520 years on http://www.ex-temoinsdejehovah.org (French).

PEDOPHILIA: lawsuit against the Watchtower in Canada. Contacts :